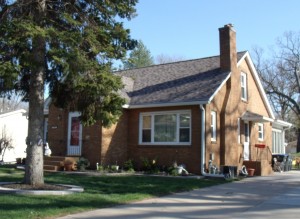 A single award was presented this year.  It was given to Jim and Pat Lerch for the outstanding and sensitive restoration of their home at 1434 45th Avenue, Rock Island, near Black Hawk Historic Site. The Lerches’ small, brick house was built in 1948 in a style typical of the era that is referred to as “Mid-Century Modern.”  It was built in 1948 by Al Kurth, the father of Jim’s aunt, Lillian Kurth Lerch, and has been in the family since then.

Perhaps because it bears no resemblance to typical Victorian styles, the residential architecture of that time is often underappreciated.  Yet, at nearly 65 years old this home is historically significant and thus recognized with the preservation award. The home was well-maintained and preservation was far from the Lerchs’ minds until July 21, 2008, when it was caught in the shear winds of a windstorm that hit south Rock Island. Three massive oak trees were felled, with one taking a substantial part of the Lerch house with it. Awakened by the early morning storm, the family felt rain in their faces as the roof opened. Although there were no injuries, the roof, cabinets, and walls, both inside and out, had to be replaced.

After one restoration company representative advised them to tear it down and start over, the Lerches hired a different contractor.  They made a significant decision in the repair of the crushed brick walls on a highly visible façade.  To replace it, since it could not be matched with modern brick, they opted to remove and reuse original vintage brick from the not-seen back wall of a side porch.  The hidden wall was then covered with siding.

Today a Sauk, carved from one of the fallen trees, watches over the Lerch house and, they hope, will guard the neighborhood from future derechos or other calamities. .