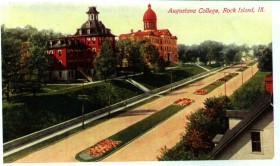 This is 7th Avenue near 38th Street as depicted on a postcard dated 1911.  The building on the left was the first building of Augustana College. It was completed in time for the beginning of school in September, 1875.  The cost was reported to be $43,000.  The building housed the entire College program including classrooms, … [ Continued 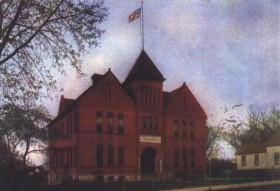 7th Avenue at 28th Street The Eugene Field School depicted on the circa 1905 postcard published by the Rock Island Postcard Co. bears no resemblance to the present Rock Island school of that name. This school, known as P.S. No. 5, reportedly cost $11,000 when it was built in 1890 to serve the 5th Ward. … [ Continued