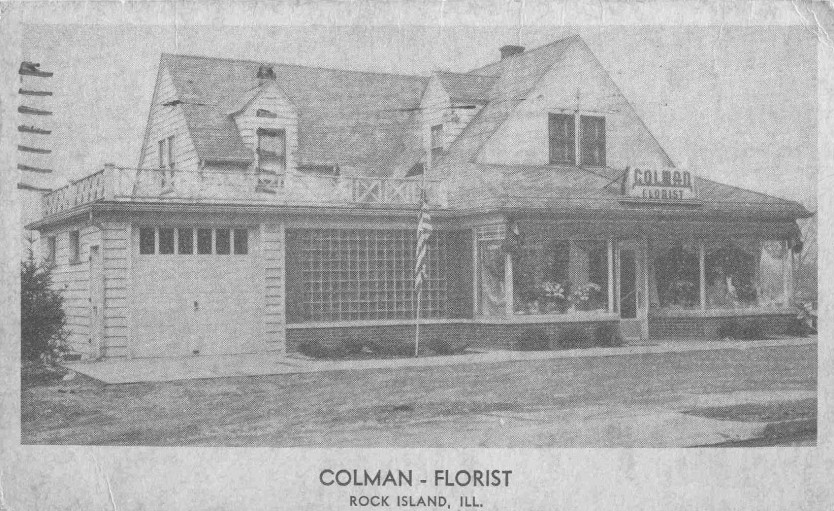 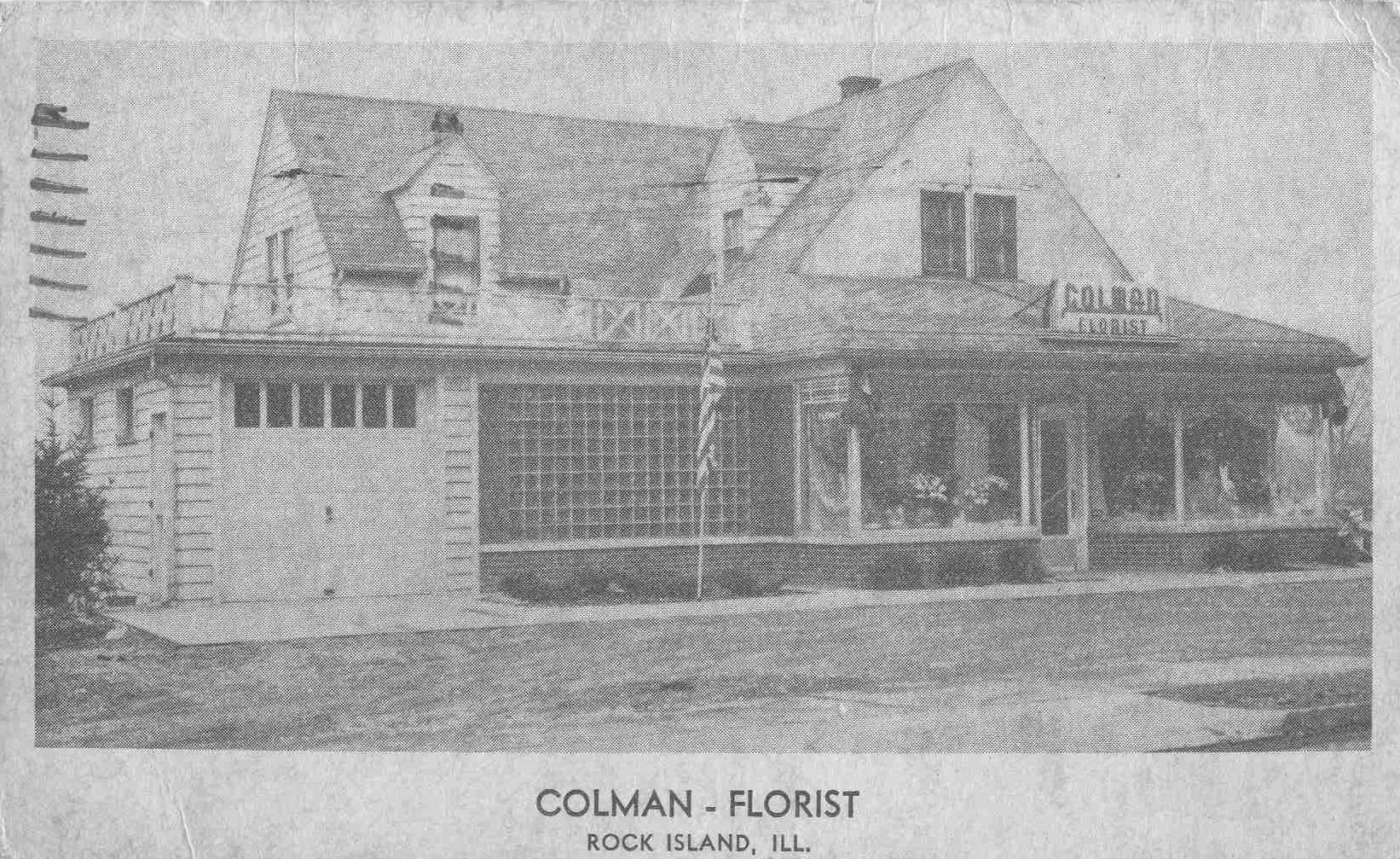 It’s not uncommon for a young man to follow his father into the family business.  But when five generations of sons and daughters continue the family heritage, it is noteworthy.  And that is the story of the Colman Florist family, whose business and home are shown on our postcard today.

The tale of this floral heritage begins in Ghent, Belgium, with Desiderius Colman and his wife Philomena, the first generation.  Desiderius and the second generation, his son Henry, were floral designers whose arrangements were awarded European medals.   Around 1910, Henry Colman and his wife, Cornelia, came to the United States with their 10 year old son, Ray.  Both Henry and, later, Ray were employed at the Stapp Florists, which was then located on the west side of Rock Island’s 12th Street at 23rd Avenue.

Stapp’s was a family business, and Ray, the third generation Colman florist, soon realized that his future would be best served by opening his own floral shop.   According to Ray’s son and the fourth generation to continue the family business, Richard “Dick” Colman, the location he chose just across the street from Chippiannock Cemetery on 12th Street was ideal.  Cemeteries provided good business for nearby florists, especially at holiday times.   In addition to the nearby Stapp firm, there was also Chippiannock Floral Company, which had no connection with the cemetery other than its name.  It was established by Anna Lange and Claus Dau in 1926 and had a retail outlet on 29th Avenue as well as several greenhouses west of 11th Street and south of 29th Avenue.

In 1933, Ray Colman opened Colman Florist for business at 2754 12th Street, right across from the cemetery.  This postcard, from Shannon Hall’s collection, shows the shop and the Colman’s home as it appeared in the early 1940s.  According to Dick Colman, the basement of the building was constructed first and served as the Colman family home for a time, until the upper stories were completed.

The picture shows a gable-roofed house partially hidden by the flower shop that features a glass block wall and recessed entrance.   The simple cottage shape of the house is typical of the 1930s, while the glass block added a sophisticated touch.  As the business expanded, more additions, the last in 1979, greatly increased the area available for storing and arranging flowers.

Ray Colman also built greenhouses at the rear of the shop and grew many of the shop’s flowers – snapdragons, chrysanthemums, carnations, and stock to name a few.  Geraniums were raised for springtime planting as well.  In the 1970s, the cost of fuel to heat greenhouses skyrocketed.  At the same time, commercial flowers from all over the world became readily available, virtually unlimited as to season.  The greenhouses were economically unfeasible and have been largely demolished.

Although Dick Colman and his sister Patricia Belvel operate Colman’s, now including flower shops in Davenport and Moline, on a day-to-day basis, other members of this fourth generation often assist them.  Three sisters and a brother grew up in the family business and readily provide help when needed.  And there is a fifth generation in the wings, ready to ensure the future of Colman Florist.   Richard’s daughter and a niece are the latest family members to carry on the legacy of fine floral design.

The back of our postcard tells another story that is timely for this season.  It dated December 23, 1944, over sixty years ago, and confirms the FTD delivery of a $5.00 box of carnations to a family in Homewood, Illinois.  It was mailed to young Rock Islander, T/5 George Sabbe, who had ordered the flowers at Colman’s.  Sabbe, who was serving in a tank division — APO New York — during this time of World War II, had grown up in the home just north of Colman’s and had worked there delivering flowers before he entered the army.

Today we thank the brave young serviceman who received this postcard and saved it for posterity.  We also thank today’s servicemen and women, especially those who are away from home.  Celebrate the legacy of Colman Florist by bringing floral joy into your life or that of a friend on any occasion.   Colman’s will even deliver.

Thanks to Dick Colman for providing much information for this story.

This article by Diane Oestreich is slightly modified from the original, which appeared in the Rock Island Argus and Moline Dispatch on December 19, 2004.