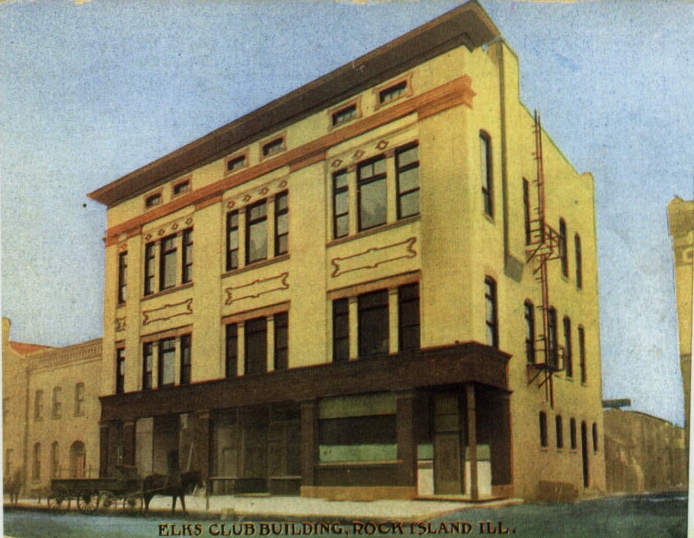 Rock Island Benevolent and Protective Order of Elks Lodge No. 980 was organized on June 26, 1905, with B. F. Knox serving as exalted ruler.  Initially, the lodge met at the Illinois Theatre on the southeast corner of 16th Street and Second Avenue.  It only took a short time for the Elks to build their own home on 18th Street, moving to the postcard building in 1908.  Downtown Rock Island was booming in this, the first decade of the twentieth century.  New buildings were going up all over – the Best Building (now VanDerGinst Building), the London (Quad City Arts), the Safety Building, and more had been built or were under construction in 1908.  Other buildings were being extensively improved.  It must have been a great relief to all when the Elks decided to construct their fine new building on a lot that had been an eyesore for years.  Since at least the early 1890s, when a small building termed “vacant and dilapidated” was on the lot, this prime real estate was unused and very inappropriate in our prosperous downtown.

The three-story Elks Club Building was designed with three storefronts that could be rented to provide income for the Elks while they occupied the upper floors.  During the early years, these storefronts held a pool hall, saloon and  a tailor.  A door at the far left (north) was the entrance to upstairs, the Elks lodge and offices.

The Elks left in the late 1920s, moving to a new home on 19th Street, and their upstairs space was taken over by the Loyal Order of Moose.  By the 1940s, the Moose were gone, too, and the Teamster’s Union had moved in.  But there was stability at the corner entrance – it always led to a saloon or tavern.  Other areas of the building were used for everything from a tobacco warehouse to an electronic school, to a VFW Post – and there were many intermittent vacancies.  Finally, in the mid 1990s, it became the home of the Blue Cat Brew Pub, which remains there today, serving gourmet food and microbrew beers.

But comparing the Blue Cat’s home to the building on the postcard, there is a big difference.  The entire third story is missing!  When and why was it removed?  It likely happened around 1940, and probably resulted from a fire or some other catastrophe.  There usually isn’t much reason to remove the top floor of a building, even if it’s vacant, when it can be simply closed off and not used.  Still it is easy to recognize parts of the current building that appear on the three story one – even the chimney that protrudes on the right side of the picture is in the same place.  However the loss of the elaborate cornice and windows is significant.

It is interesting to notice that the top trim on the wide brick panels between the groups of windows made those panels appear like square columns supporting the cornice.  That column detail, on a smaller scale, is still there between the individual second story windows within each group.  These quite modern windows, with a fixed sash between two double-hung windows, are known as a “Chicago style window.” These windows were very popular in commercial buildings such as this. You can spot more Chicago style windows downtown, too.

Renovations in recent years have made the building much more attractive than it had been since the loss of its top floor.  Although there is now only one major entrance to the pub and restaurant, the pattern of windows on the storefronts have been reworked to be reminiscent of the historic appearance.  The iron support column at the former saloon corner remains and the old stairway entrance to the Elks lodge can still be used to get upstairs.  Renovations also exposed a vintage chewing tobacco sign that you can see painted directly on the brick wall inside, probably a remnant of the building’s days as a tobacco warehouse.

The Blue Cat is a wonderful example of how a building that been poorly remodeled in the past can be partially restored to reflect the historic architecture that remains.

This article by Diane Oestreich is slightly modified from the original, which appeared in the Rock Island Argus and Moline Dispatch on January 27, 2002.