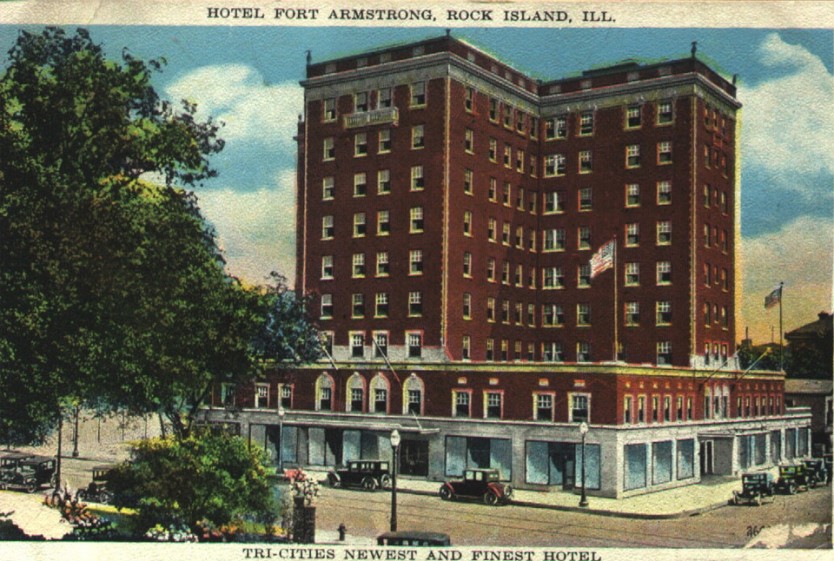 The new Fort Armstrong Hotel at the corner of 19th Street and 3rd Avenue received major coverage in the Seventy-fifth Anniversary edition of the Rock Island Argus, on December 31, 1925. “No other factor in recent years has served more to exercise the spirit of community cooperation in Rock Island than the building of the Fort Armstrong hotel.”

The nine-story hotel designed by Chicago architect Charles W. Nichol is Italian Renaissance in style and was completed in 1926, when the Argus noted that “A crowd estimated at 10,000 looked through the beautiful new Fort Armstrong Hotel from basement to 9th floor at a public inspection.” The first and second stories form a large square covering the entire building site. The seven upper stories form a cross with four wings extending from the center, giving every room an outside exposure. The building is constructed of red pressed brick and the first floor is faced with Bedford stone. Terra cotta detailing adorns the entire structure.

The interior featured a grand two-story lobby with terrazzo floors and marble trimmings. Sharing the first floor were a coffee shop, dining room, private meeting rooms, offices and seven retail shops. The mezzanine featured three additional dining rooms, a banquet hall and an impressive ballroom. Tucked into the basement, along with the heating plant and coal room, were a barbershop, billiard room and bowling alley. The upper floors contained 160 guest rooms and the building was topped with ten apartments.

Today the Fort Armstrong is listed on the National Register of Historic Places. It has been restored and is operated as an assisted living facility. In addition, it offers banquet and meeting rooms open to the public and visitors are always welcome to stroll through the grand lobby and experience the elegance of a 1920’s hotel.

This article by Linda Anderson, slightly modified, originally appeared in the Moline Dispatch and Rock Island Argus on August 12, 2001