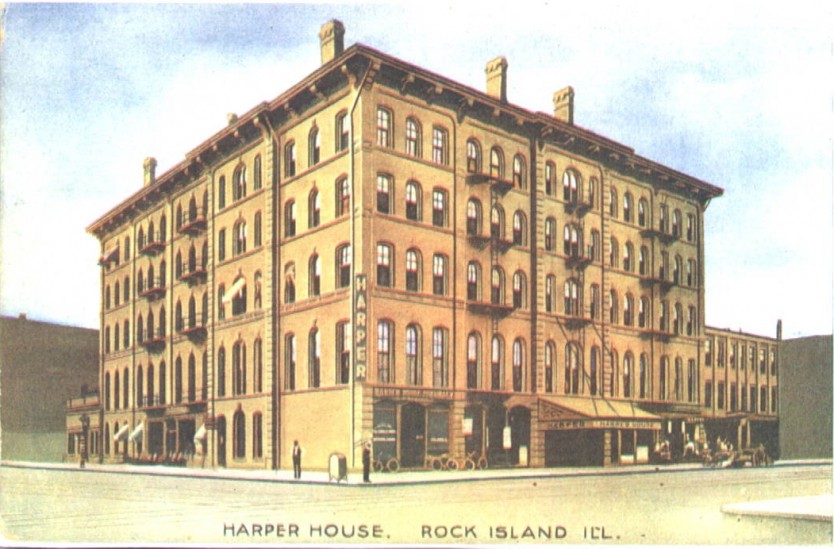 It opened to wide acclaim with an elaborate banquet in February 1871.  And according to an 1877 County Directory,  “One of the oldest residents of Davenport, a citizen whose interests are in that city, said ‘The Harper House is a better advertisement for Rock Island than three times the money it cost invested in any other business in that city.’”

It was named after its owner Ben Harper, who was born in Philadelphia in 1817, and came to Rock Island at the age of 33 when our population was only about 2000.  He was elected mayor of Rock Island in 1854 and also served as president of the Board of Education.  In 1867, he purchased the old Island City Hotel at the southwest corner of 2nd Avenue and 19th Street, and renamed it the Rodman House in honor of Lt. Col. Thomas Rodman at the Rock Island Arsenal.  Unfortunately the Rodman House burned as Harper was remodeling it – and Rodman himself died soon thereafter.

Undeterred, Harper set out to build another hotel on the site, which had been used as a hotel site since 1846.  Designed by local architect Isaac Holmes, it was known as the Harper House.  It was a five-story 100-room luxury hotel with a 1200 seat auditorium.  It was noted as the first hotel “in the west” with fire escapes.   Among the stars of the era who appeared in the auditorium were Sarah Bernhardt, Mark Twain, Buffalo Bill, and Tom Thumb.  The hotel had a music store as well, and even Turkish baths, which were reserved for the use of women on weekdays between 9 am and noon. 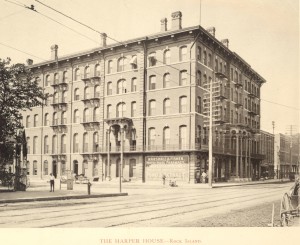 An 1893 picture of the hotel shows an imposing entrance framed by two-story columns on the north side and a similar but smaller entrance on the east side.  In an interesting notice in July of 1886, the Argus noted that the Harper House was being painted and that the exterior would be transformed into a deep red.  The featured postcard, which dates from the early 1900s, shows the hotel after an 1898 remodeling, which removed the grand entrance porticos, and replaced them with simple canopies.  You can also see the small balconies at intervals along the vertical fire escape ladders.   Interior photos from the early 1900s in “Picturesque Tri-Cities” show the elegance of the lobbies as well as an Oriental parlor.  It is easy to believe that the Harper House was the equal in quality, if not size, to any Chicago hotel.

Another remodeling was announced in 1908, after the DeSilva family purchased the hotel from the Harpers.  Plans were announced to enlarge the hotel to six stories and to extend an annex on the south side to the same height.  The plan would have added up to fifty rooms and would equip each room with a bath.   However no such large-scale additions were made.  The hotel remained at five stories and the annex was not enlarged.  Nonetheless the hotel now billed itself as the “New” Harper House, probably because of interior renovations.

Yet another remodeling took place in 1934.  Thanks to a reader who sent us a 1939 postcard, we can see that the external changes were once again primarily at the entrances.  The fancy canopies from 1898 were replaced with a very simple one on the east while the one on the north was eliminated.  Storefront windows were extended around the corner at the spot where there is only a blank wall in the featured postcard.  And sometime between 1898 and 1939, the small panes in the window sashes were replaced with single larger sheets of glass.

The DeSilva family owned the hotel until 1964, when they sold it to a group called Harper House, Inc.  Only four years later, the hotel closed its doors.   Although the storefronts were still rented for a time, the Louisianne Room to the south, a fine and popular restaurant which had been added about 1960, was closed as well.

What would become of the Harper House?  Alas despite valiant efforts by then alderman Robert Maurus to save it, the wrecking ball conquered all in 1973.  The hotel contents, including the ballroom’s crystal chandeliers and grand mirrors as well as ordinary furniture and restaurant equipment, were sold.  Many came not so much to purchase the dishes and glassware but to get a final glimpse at this grand old lady, this queen of Rock Island.  Some still remembered the fancy balls and elegant dining, others could only wish they had experienced them.

A modern office building was erected on the site soon after.

This article, by Diane Oestreich, is slightly modified from the original, which appeared in the Rock Island Argus and Moline Dispatch on April 14, 2002.