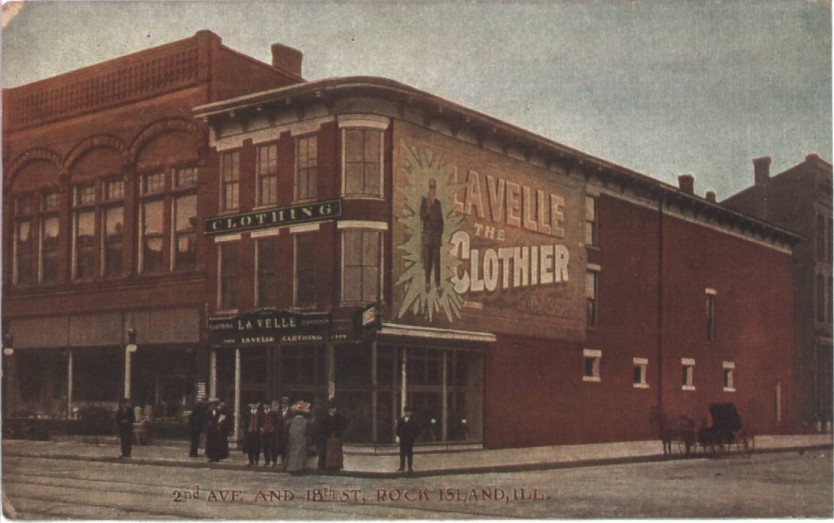 You might not believe it – but both of the buildings shown on today’s postcard are still standing on one of downtown Rock Island’s most prominent corners.  Yes, they have changed a bit.  But since today’s appearance was created between 1925 and 1950, the buildings are still considered historic. Thanks to Dick Iverson for sharing his postcard that shows the southeast corner of Second Avenue & 18th Street as it looked around 1908.

The first occupant of the three-story corner building, here called Lavelle Clothiers, was the Stewart and Montgomery Hardware store.  That business was established at this location in 1855, although the postcard building appears to be of 1870s vintage.  The hardware store remained here through the turn of the century, changing its name to Rock Island Hardware in the early 1900s.  Around 1908, the hardware company moved to the taller – but still only two-story – building at the left, taking the space over from Henry Dart’s Sons, wholesale grocers.   A clothing store operated by Thomas R. Lavelle moved into the corner building.   Rock Island Hardware remained in the second location into the 1940s, while a series of other stores operated at the corner.  A wonderful interior view of the hardware store can be seen in a 1915 booklet called Rock Island, County Seat in the historical collection of the public library.

By 1910, Sexton Brothers Clothiers had replaced Lavelle.  This helps establish the postcard publication date as circa 1908, which is also the year it was mailed.  Other occupants between 1920 and 1970 included Riess Drug Store, Schwenker’s Shoe Store, The Leader Store and, in the late 1940s, Walgreens.

These retail operations used the ground floor storefronts.  But what about the upstairs?  Throughout the years, Sanborn Fire Insurance maps consider these two buildings as a single unit.  The 1886 Sanborn Fire Insurance map calls the two “Dart’s Hall,” although the hall was on the second floor of the left building. The stage was at the south or back end, which may explain the very high ceilings. Many entertainment venues are noted as making appearances at Dart’s Hall. In 1898, the two structures are called Dart’s Block, rather than Dart’s Hall.  By the early years of the 19th Century, the Dart name had disappeared and the upper floors were operated as Waddell’s Hotel.

What is most interesting about these early Sanborn maps is that they show iron balconies extending along the Second Avenue side of the two buildings.  Such balconies were common in the early days of Rock Island’s Second Avenue, giving it a nearly New Orleans ambiance. Most of the balconies on these and other buildings were removed around 1900.

In the late 1920s, the corner building was extensively remodeled, resulting in the upper stories we see today. A layer of new brick was added to the street sides to hide the changes.  The three Second Avenue windows were changed to a single larger window opening and several windows and storefronts were added along the 18th Street side, where the painted sign appears in the postcard. Additionally, an entrance to the upper floors was created on 18th Street.  The remodeling was the impetus for yet another name change – our building became the Liberty Building.   From that time on, the upper floors have been used for offices.

Much later – perhaps as late as 1950 – the second building was remodeled to match the corner and make the two appear as a single large building.   Yet the seam between the two is still visible to the discerning eye.   On the interior, the formerly two-story building was converted to three stories. Traces of the original window layout can be seen on the alley side, where the old brick was not covered.

Today, we see an attractive large three-story building, with three wide sets of windows across the front and several more along the side.  Unfortunately, although of the same overall size, the current windows have a different design than the original remodeled windows.   The top of the Liberty Building has a simple flat cornice banded with stone (or concrete) above diamond shape inserts.  The stone lintels (tops) of the third story windows extend around the building, while other windows have a shorter row of stone outlining lintels and sills.  Another wide horizontal band of stonework sets off the storefronts.  An understated but elegant building indeed!

This article by Diane Oestreich is slightly modified from the original, which appeared in the Rock Island Argus and Moline Dispatch on May 19, 2002.