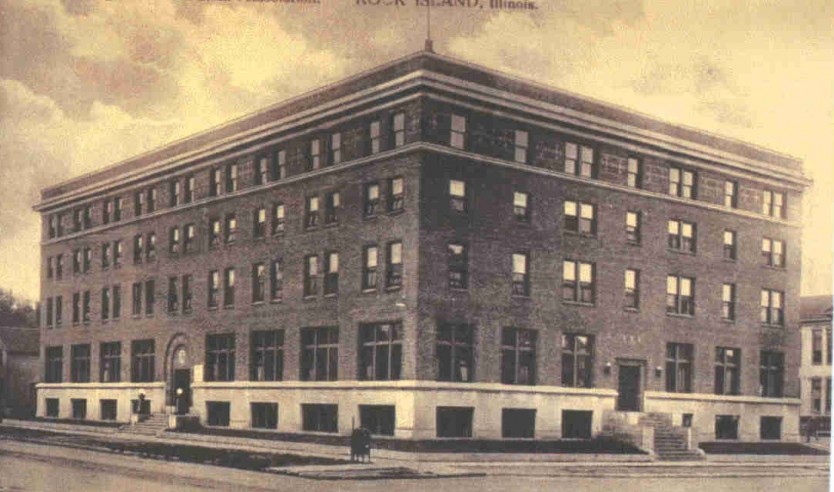 Sometimes a building becomes so familiar to us that we don’t really notice it anymore.  That may well be the case of Rock Island’s Young Men’s Christian Association (YMCA) building shown on this circa 1915 postcard from Shannon Hall.  It covered 12,000 square feet at the southwest corner of 20th Street and Fifth Avenue when it opened in 1912.  Even though it is already eighty years old, it still looks surprisingly modern, which is why we may not appreciate it as excellent historic architecture.

Designed by architect Cyrus D. McLane, its exterior was initially deemed “plain but attractive,” with great praises reserved for its interior design.  But a closer look at this four-story building that was designed to function as a physical, social, civic, and educational center shows a structure that is anything but plain.  Not only is it still a most attractive building that can hold its own with any other of the era, it is largely unchanged as well. Even though many of the windows are now covered with wood, the remaining ones appear to be original.

Architect McLane was a graduate of the University of Illinois who joined the Davenport architectural firm Temple and Burrows from 1904-1910.  From 1910-12 he was the architect for Rock Island Plow Company.  In 1912 he founded McLane Engineering in Rock Island.   He later moved to Chicago where he died in 1945.

The architect combined artistic style with extremely durable engineering design to create this fireproof building. The frame, floors, and roof of are of reinforced concrete.  Exterior walls are structural tile faced with heavily textured deep red brick. The inch-wide joints add even more texture by incorporating small pebbles in the mortar mix.  The foundation, which is composed of large stone blocks tooled with horizontal grooves, has a deep rounded stone drip edge at its top.

Inlays, that first appear to be stone, surround the round-topped entrance arch on the east and decorate the brick between the fourth story windows. Look more closely, through the eighty years of dirt, and it is apparent that these diamond shaped inlays are a rich green-glazed tile.  Such tiles are typical of designs in the Arts and Crafts style.

The top cornice, the stonework below the upper windows, and the drip edge combine to produce a strong horizontal feel, making this very large building more compatible with its smaller scale neighbors, mostly houses in 1912. These trim elements and the fancy front brick extend a long distance around the sides as well, ensuring that the common untrimmed brick used in rear surfaces would not be visible from public right of way.

This YMCA replaced an 1890s building two blocks away that was described in a postcard story published in July of 2001.  The highly detailed entrance arch on the pictured building may well have been intended as an homage to the massive arch that framed the main doorway of the older structure, as such arches were not typical of 1912 architecture. From this entry, one entered a “magnificent” 35 x 76 feet lobby.  A reading room was located to the left of the lobby while to the right, at the northeast corner, was the dining room.  Just east of the dining room was the hobby and game room of the boys department that could be accessed from the doorway at the right of the postcard.

A swimming pool, the gift of Mrs. J. F. Robinson who lived at 603 20th Street, was located behind the lobby at the far west of the building.  The pool, termed the central feature of both the basement and the first floor, had a gallery for observers.  Another observer gallery was located in the large gymnasium, which was in a three-story tall wing at the southwest corner. The gym also held a running track.

The three upper stories were divided into smaller rooms.  The second story had public rooms for club meetings and class work.  The two upper floors were planned with 34 bedrooms, able to house 100 men.  Apparently these rooms were not all completed in 1912, as a 1917 newspaper report noted that forty more men could be housed if the fourth story was completed.  There was short-term housing pressure during that wartime era, with many soldiers passing through.  The report noted that any military uniform served in lieu of a YMCA membership card.

The yard surrounding the YMCA had a playground as well as tennis, handball, basketball, and volleyball courts. At the far right of our postcard the old Kemble School is visible.  In 1927, it was purchased and razed to extend the YMCA property.

The downtown YMCA continued to serve our community until 1977, when it was replaced by another “new” YMCA building at 4303 24th Street.  That facility is now owned by the city parks department and is operated as the Rock Island Fitness and Athletic Center.  In more recent years, our postcard YMCA has held a furniture retail store.

This article, by Diane Oestreich, is slightly modified from the original that appeared in the Rock Island Argus and Moline Dispatch on July 6, 2003.