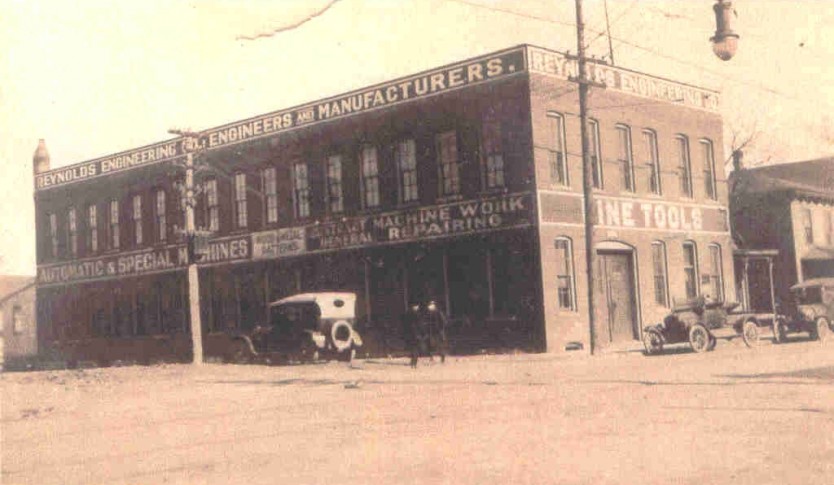 This Real Photo postcard from about 1926 shows the home of Reynolds Engineering and Manufacturers.  Thanks to Richard Iverson for sharing this rare postcard. Some of the material in this article comes from a 1967 interview with long-time president of Reynolds Engineering Company, Mr. Harold Brown, found in the Rock Island County Historical Society files.

We have passed this building at the intersection of 38th Street and 5th Avenues in Rock Island hundreds of times.  And most of us do not have any idea what goes on inside it, since its work is mostly done for other businesses.  But take a closer look at Reynolds Engineering and its building as it appeared around 1924.

Reynolds Engineering was founded in Moline, where it was named for its president George D. Reynolds, a mechanical engineer who lived in Rock Island at 631 43rd Street.  Harold Brown worked for the company starting about 1912.  According to Mr. Brown, when Mr. Reynolds moved to Ohio, John P. Reynolds took over the Moline building lease and soon invited Mr. Brown to share the lease.  John Reynolds was associated with the company for several years as president with Mr. Brown as vice-president.

Even in those early years, their work required highly skilled workers, for both metal machining and in the woodworking pattern shop. During World War I, Reynolds Engineering built wagon wheel hubs for Moline Wagon Works, which was building “escort wagons” for the army.  These wagons had wood wheels with wood hubs and iron treads shrunk onto the rims.

A much more technically challenging project for Reynolds was their contract to build forty large “chucks,” geared adjustable holders, also during WWI.  As each group of chucks was finished they were shipped to Belgium where they were urgently needed to hold large — 3 to 6 inches diameter — artillery gun barrels for repairs.

In 1918, Reynolds built a new home at 38th Street and 5th Avenue in Rock Island.  Although the street now curves in front of the building, part of the original 38th Street is still there. The original structure was only one-story and was half the width shown on our postcard – three windows wide facing 38th Street. Business must have prospered in the new location, as the next decade would produce rapid expansion of the building.

Four years later a partial second story was added.  Not too much later, based on the vintage cars on the postcard, a two-story addition to the south nearly doubled the size of the building.  Notice the small house with a porch just peeping out from the right side of the building.  After the mid 1930s, this was demolished for yet another one-story addition.

Even if there were no signs proclaiming the nature of the Reynolds business, it does not require a great stretch of the imagination to identify this as a utilitarian manufacturing building.  There is no grand entrance or display windows as there would be for a store, hotel, or even apartment building.  The double doors at the front are clearly intended for vehicular access. Many windows closely spaced around the periphery ensure maximum internal light.  Sanborn Fire Insurance maps also identify skylights within a steel trussed roof, at least in the newer addition.

Over the years, other additions were made to the rear of the building.  The most obvious change today is in the front, where new brickwork covers the old.  When this was added, the wide doorway was removed and an upper window was covered.  The north side of the building is unchanged except for the installation of modern windows at the second story level.  All of the original windows appear to have wooden frames, while the newer windows are of steel.  Steel windows were popular for both industrial and commercial buildings since at least 1920.

Nowadays there is much more tasteful signage that says just about the same thing – Reynolds Engineering Company.  From the very beginning in Moline, and since 1918 in Rock Island, this has been an engineering design and custom machining facility.  Although in more recent years, architectural ironworks and a production shop in Milan have been added, inside the postcard building, there are still craftsmen doing the same highly skilled work their fathers and grandfathers did several generations ago.

This article, by Diane Oestreich, is slightly modified from the original, which appeared in the Rock Island Argus and Moline Dispatch on February 2, 2003.