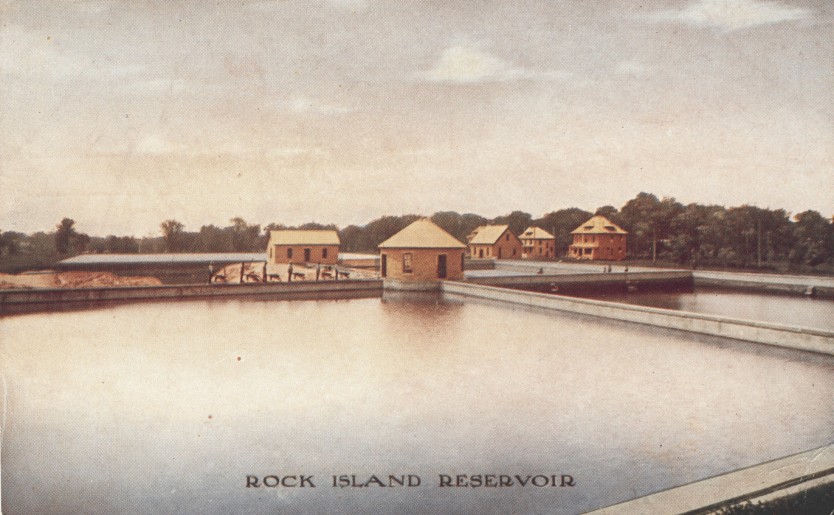 It’s something we city folks take for granted – a twist of the wrist and pure clean water flows.  But that wasn’t always the case here in Rock Island.  In the 1800s, safe drinkable water couldn’t be taken for granted.  This postcard, which features a less-than-scenic view identified as “Rock Island Reservoir,” celebrates the achievement of plentiful, safe drinking water for our city.  The card is from the collection of Dick Iverson.

The view is taken from about 15th Avenue and 24th Street looking toward the southwest – about where Rock Island’s recycling center is located today.  We can clearly see at least three large areas of water as well as a small round structure in their midst with a slightly larger rectangular building to the left.  Those two structures are identified on Sanborn maps as valve houses.   Two buildings in the distant right background are homes that are still standing on 22nd Street in the Highland Park Historic District.

Although established as a city in 1841, it took another thirty years for Rock Island to create a public water facility.   In 1871, the Rock Island City Council allocated $75,000 to build a pumping station and install water mains.  Water from the Mississippi would simply be pumped directly into the water mains without any way to process and purify.

That first pumping station was located at the north end of 6th Street, near where the Crescent Bridge reaches the shore nowadays.  It was soon evident that the location was unsatisfactory – first, because the inlet pipe didn’t extend very far into the river, and second, because the intake was located very close to the sewage (untreated of course) outlet.  When the river froze and the channel was narrowed, sewage could — and did — contaminate the water.  After several outbreaks of “winter cholera,” the city decided the pumping station must be moved, but couldn’t afford the move.

Local philanthropist and civic booster P. L. Cable came to the rescue by donating $25,000 to assist in the 1882 construction of a new pumping station at the foot of 24th Street.  That pumping station, remodeled by architect Benj. Horn in the 1930s, remains there today.   But it still pumped river water directly into the mains without processing.

In 1891, Hon. Ben T. Cable, another prominent citizen, donated a “Jewel type” filter for the incoming water. This filter would at least ensure clear, if not totally purified, water.  The water was then sent directly into the mains at a maximum rate of 2 million gallons per 24 hours.  A big problem still remained, since occasionally the demand was as great as 3 million gallons per 24 hours and, without a reservoir system, the pumps and filter simply could not keep up with demand.

Finally, in 1897, a group of businessmen identified as “capitalists” purchased 26 acres atop the bluff between 22nd and 24th Streets, 13th to 18th Avenues, and in turn resold it to the city at a cost of $1000 per acre.   This land had previously been owned by Bailey Davenport.  Construction of two settling basins and three slow sand filters was completed in 1899, and a main reservoir of 10 million gallons was completed in 1900.  The settling basins allowed particulate material to settle out of the water, then the sand filters further clarified the water.

The slow sand filters were later replaced with rapid mechanical sand filters in 1911, resulting in a capacity of 6 million gallons per 24 hours.  Additional filters were added in the late 1930s to further increase the capacity. Chemical treatment of the water – chlorination – was not used until the late 1920s.

In 1908, it was reported that Rock Island had 4400 private water consumers and 250 fire hydrants as well as one water tower located near 30th Street.  This postcard represents the waterworks around that time, and shows the three sand filters.  The settling basins were located directly north of the filters, while the open reservoir for the clean water was just across 16th Avenue on the southeast corner of Reservoir Park.  The small building just right of center near the houses was adjacent to the reservoir.  Both the reservoir and building were demolished when the four covered “dome” reservoirs next to 18th Avenue were constructed in the late 1938-1939.  The settling basins continued in use until 1999.

Even today it’s much the same story.  Water is drawn in from pipes extending to the middle of the Mississippi River by the 24th Street pumping station, which then pumps the water to the filtering and purification works at our postcard location.  After processing – much more comprehensive nowadays – all of the purified drinking water for the city is stored in the four domes.  Finally, the water is distributed by gravity, either flowing naturally to lower areas of the city or being pumped up into several “standpipes” or water towers throughout town. In all cases, it is the difference in height between the water source and its use that provides constant pressure to our faucets and hydrants.  It is also worth noting that our complete water processing and storage system is safely enclosed.

Concurrent with the development of Rock Island’s bluff top waterworks was the creation of its large parks.  From its earliest years, the extra land around the waterworks was known as Reservoir Park.  By 1902 woodcutters were warned to go elsewhere to cut their wood supplies (previously woodcutting had occurred in both Longview and Reservoir Parks).  Today, the open property is still called Reservoir Park and, with the exception of the parts actively used for water processing, is maintained by our Parks and Recreation Department.

Reservoir Park is also part of the Highland Park Historic District that, in 1986, was recognized as Rock Island’s first historic district.  The residential part of Highland Park is the four square blocks between 20th and 22nd Streets just south of 16th Avenue.  It was platted in 1895 and the last house was built about 1928.  Two earlier Highland Park houses can be seen in the right background on our postcard.

We can identify those two houses as the Ward House, built about 1906, and, farthest right, the Wilmerton-Carll House, built about 1907.  Another house was built between these two around 1914 – later than the picture on this postcard. The frame Ward house was the first one of three houses that John and Ella Ward built for resale in Highland Park.  It was probably designed by architect George Stauduhar, who was one of the first Highland Park residents and designed many other homes there.

The Wilmerton house was first occupied by the brother of notorious gangster John Looney, William.  However by 1909, it was the home of Wallace W. and Anna Wilmerton.  He was the president of the Rock Island Publishing Company which published the TriCity Morning Journal and his feuds with John Looney are documented elsewhere (see http://www.rigov.org/index.aspx?NID=825 ).  It is built using a heavily textured brick, similar to brick used in the nearby Villa de Chantal.  Both the Wilmerton and the Ward houses were designed in what is known as the American Foursquare style.

We propose a toast.  Next time you open the faucet and draw a glass of Rock Island’s sparkling pure water, raise it in salute to our 140 year old public water system and all who made and make it possible.  And then give another tip of the glass to our Highland Park Historic District and its Reservoir Park.

This article, by Diane Oestreich, is slightly modified from the original which appeared in the Rock Island Argus and Moline Dispatch on December 16, 2001. 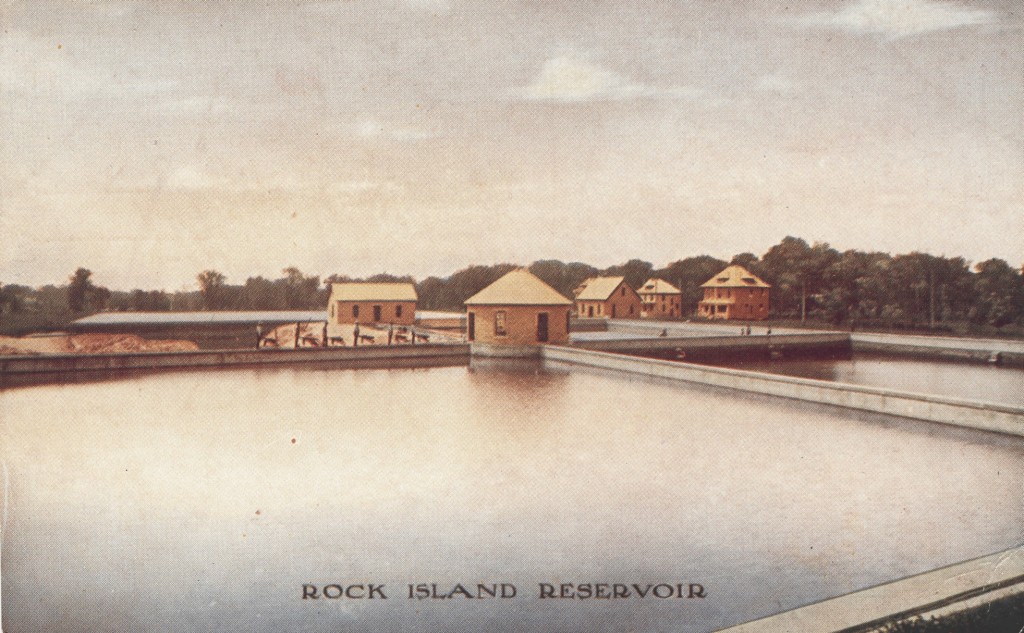