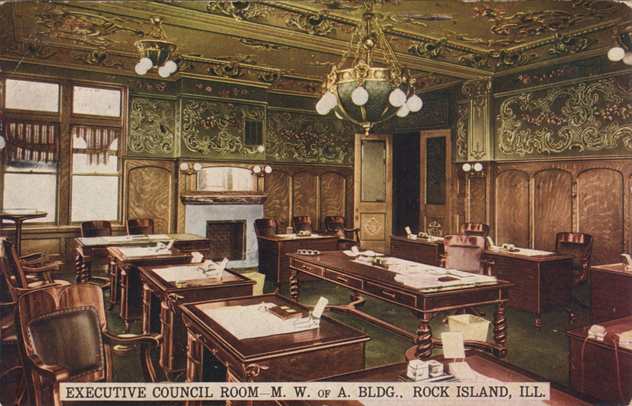 The next time you go to the Rock Island County Building, make it a point to go through the main entrance near the west end of the building. As soon as you are inside the building, stop and look up. Odds are you’ve never noticed the elaborately paneled wood ceiling in the entryway. As you look around, you’ll notice the marble-clad walls, the hefty quarter sawn oak doors with elaborate bronze hardware and a marble mosaic floor.  This small area gives you an idea of the elegance of the interior of this building when it was the national headquarters for Modern Woodmen of America (MWA). The postcards shown here are from a series published about 1909.  Rooms such as the Executive Council Room now have paneling and drop ceilings.  Are some of the original elaborate decorations hidden behind these modern coverings? 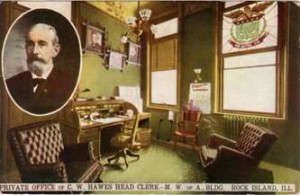 This postcard shows the private office of Charles W. Hawes, the Head Clerk of MWA. The title “Head Clerk” is misleading; Hawes was the top executive of the company. During his lifetime, Charles Hawes was recognized as the oldest “native” of Rock Island, having been born in the Village of Stephenson (now part of Rock Island) prior to 1842. He was elected Head Clerk of MWA in 1890. Mr. Hawes was instrumental in relocating the MWA. headquarters from Fulton, Illinois, to his home town of Rock Island. Other members of his family were key players in the MWA organization. His wife, Mary Fay Hawes, was chosen as one of the board of supreme managers of the Royal Neighbors of America, the ladies auxiliary of the Modern Woodmen of America. And his brother, Frank Hawes, was for many years the statistician for MWA. and later chief of the accounting department.

Hawes’ main office was much more formal than his private office and it has the same basic floor plan as the Executive Council Room. 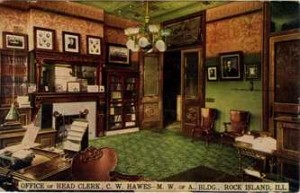 These rooms both match well with the floor plan of the current Rock Island County Board meeting room on the second floor. The distinctive features are the fireplaces and the windows that open into a “notch” on the east side of the building.  Without further research, though, we cannot tell on which of the three floors these rooms were located.

These pictures reflect the competition among different types of lighting early in the 20th century. Up until the tungsten filament for electric lights was perfected around 1910, electric lights with carbon filaments produced only a very dim light, and gas 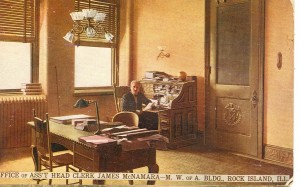 lights were a proven, reliable, and economical source of light. The Executive Council Room appears to have electric lights only; quite up-to-date around 1909! All of the other rooms shown have the more common combination gas and electric fixtures. The fixtures for the Head Clerk’s Office and the Assistant Head Clerk’s Office are of the same basic design with both the electric lights and the gas lights feeding from the same pipe!  This was a fairly common design trick of the period, the pipe having a divider soldered in to keep the gas and the wires separated. 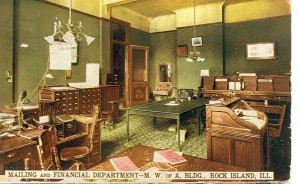 design, and instead of glass shades on the gas lights, the burners are dressed up with porcelain “candle covers.” These were not only cheaper than glass shades, but they also provided brighter light. Bright light seems to have been a concern in this department as evidenced by the cords hanging from both ceiling lights to power electric table lamps. This derived from the earlier practice of using a hose to connect a gas “portable” (table lamp) to a gas jet on a ceiling gas light.  Electric wall outlets were not yet in common use.

The interiors located in the older 1898 part of the MWA building were almost certainly fitted with dual gas-electric fixtures originally.  Although downtown had electricity by 1890, the new technology was deemed undependable and combination gas-electric lights were thought  to be more reliable.  By the time the annex was built in 1904, electricity downtown was more dependable – or perhaps just more accepted.  Even then, new construction in nearby residential areas still opted for dual lighting capabilities. Surprisingly, even after the demise of gas lighting, but before the availability of reliable battery-powered emergency lighting, some municipalities required that gas lighting systems be installed in public and commercial buildings to serve as emergency lighting in case of electrical power failure.

This article, by Walter Lilius, was researched and written in June 2013