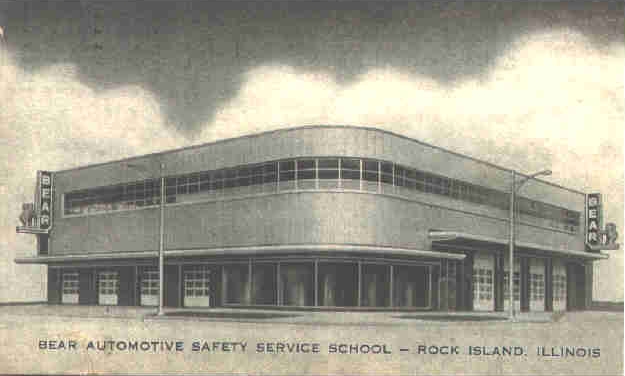 The Happy Bear—that’s what they called the impish critter who was the mascot and logo for the Bear Manufacturing Company a business which opened in Rock Island and stayed on for a long run.  The founders of Bear were brothers Will and Henry Damman, who invented an electric starter for the Model T so auto owners could forget their cranks.  They moved to Rock Island in 1913 to manufacture and sell the starter.  The company was quickly successful – the starter was so popular that Henry Ford started making electric starters standard equipment, and the Dammen’s market disappeared.

Remarkably undeterred, they still saw a business future in the automotive business and went on to build the company that was incorporated in 1917 to design and manufacture auto equipment.  Bear equipment became the standard for diagnosis and repair of wheel, steering, and frame alignment.  Later the company expanded auto safety equipment of all types.

The Happy Bear was with them from the earliest days. The accepted version of the little guy is

based on a vintage slang expression,

“It’s a bear!”    Nowadays, of course, that would mean it’s a tough job, but 80 years ago, it referred to a product that was rugged and top-quality.  Will Dammen thought it a perfect symbol for his top quality company.

Bear not only manufactured equipment, it trained people from all over the country how to use that equipment.  After training mechanics for twenty years, more space was needed. On today’s postcard, we show the new $400,000 modernistic Bear Automotive Safety Service School which opened in 1949 and tripled the number of students who could be accommodated.

The grand opening was called an event of national importance in the automobile world, because it was the only school exclusively devoted to teaching a variety of subjects related to motor vehicle safety.  There was an elaborate three-day opening celebration, with a dinner for 300 auto executives held at the new school on 21st Street at 5th Avenue.  Keynote speaker was the director of training for general Motors.  Probably much more entertaining was Wilbur “Gentlemen, start your engines” Shaw, Indy Speedway President and racing champion, who told tales of his racing days to a large lunch crowd of local business and civic leaders.

There’s a rule about buildings – they have to be at least fifty years old to be considered historic. That’s according to the requirements for the National Register of Historic Places.  The logic behind it is that a building must stand the test of time.  Will we think it’s as good fifty years from now as we do now?   Conversely, buildings we don’t like or overlook now may be harbingers of the future and, as such, are historic.  But we won’t know for sure fifty years.

The fifty years is up for the Bear school.  And it’s looking mighty historic.  Its style is officially called  Modernistic, but most people can look at it and recognize it as a first cousin to the trains of the forties – the “streamliners” that were such a drastic change from the old style engines. Streamlining evoked speed. Cars were streamlined, too, even toasters and coffeepots.

Streamlining of the Bear School is most apparent on the second story where the sweep of the vertical aluminum around the corner and the continuous line of metal-framed windows look just as they did in 1940.  Integral metal awnings carry out this sweeping look.  The Bear signs, streamlined in their own design, are located at either end of the building, so they don’t interrupt the flow of the design.  The first story is more utilitarian, largely constructed of brick.

Bear Manufacturing thrived under Damman leadership, even into the second generation.  Will Damman’s daughter, Doris Damman Day, and her husband, Victor, were in charge of the locally owned company for many years until it was finally sold to a multinational corporation.

When the Damman/Day family sold the company, manufacturing facilities remained in Rock Island, but the school was closed in the 1970s.  By 1980, the manufacturing operations in Rock Island started closing as well.  Although Bear products are still made and sold by the SPX Corporation of Waukesha, Wisconsin, there’s no indication of the Happy Bear on their website.  It’s easy to speculate that he’s not so happy now.

But Happy Bear would probably give us a big grin when he sees his old school still being used by the Rock Island – Milan School District as its alternative education high school.  Recently, windows on the first floor were shortened (windows had already replaced some of the large overhead doors).  Over the years, 5th Avenue had been widened considerably, and the very low windows were not compatible with the speedy traffic there.  School architect William Appier’s designs kept the best of this historic building while adapting it for safety and classroom needs.

Special thanks to Dick Iverson, long-time Bear employee, who shared both information and memorabilia – including this postcard.

This article by Diane Oestreich is slightly modified from the original which appeared in the Rock Island Argus & Moline Dispatch on October 28, 2001.