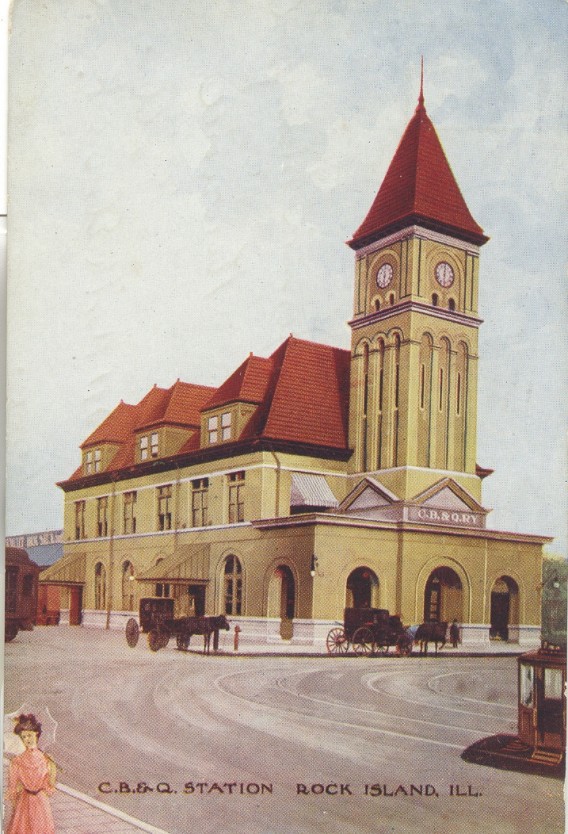 By any standard, this is an impressive building. And what is even more surprising, is that, for a few years, there were two similar stations in downtown Rock Island. The other one, the Chicago, Minneapolis & St. Paul Station, stood at the end of 17th Street near the river until it was destroyed by fire about 1910.  This postcard shows the Chicago, Burlington & Quincy (C B & Q) Station – notice it was not called a depot – that was located on Twentieth Street facing downtown from just south of Second Avenue.  With its 6-story clock tower, it was a landmark in Rock Island for over sixty years.

The C B & Q Railroad Company opened its new station in 1901, replacing an older single story one located just north of Second Avenue.  Locally, the C B & Q was referred to as the “Q,” and occasionally as the “Burlington.”  The “Q” arrived in Rock Island in 1879, when it purchased the rails of the Rockford, Rock Island and St. Louis line.  That line had been chartered in 1865 with rail construction completed four years later.

A large banquet, whose theme was “All Roads Lead to Rock Island,” was held at the Harper House Hotel to celebrate the opening of this marvelous new station.  The dinner brought together local and railroad dignitaries – all men –to make congratulatory speeches and promises for the future.

The Rock Island firm of Collins Brothers was the general contractor for this new $150,000 station and also built the adjacent freight house, just visible at the rear of the station.  Wide arches at the entry and smaller ones in the tower define its style as Romanesque.  What you can’t see on the postcard is the exquisite detailing of these arches, a result of how they were constructed.  The bricks in the semicircular tops are not flat; they are tapered on either side so that each brick is shaped somewhat like a keystone.  When many of these bricks are assembled with uniform mortar joints and their narrow ends inward, a semicircular arch results. Each diameter of arch thus required a unique taper on its brick.  This level of workmanship is not seen in modern construction.  If you want to observe tapered brick up close, visit the restored Rock Island Lines depot on 5th Avenue near 30th Street to see similar brick in the arched openings.

An interesting architectural detail in the clock tower is the narrow slitlike openings within the arches, which were based on a feature of medieval castles.  The slits, which were usually located near the entrances allowed archers to shoot their arrows at enemies who tried to enter, with little chance of being hit in return.  The openings were called arrow loops or arrow slits.

The C B & Q continued in use for many years, with waiting and “retiring” rooms downstairs and C B & Q offices up.  Perhaps the best comment is that written in 1909 when this postcard was mailed.  The note on the back said only, “This is the best station in town.”  Even after passenger use was discontinued, the upstairs offices remained until 1966, when all operations moved to Moline.  The station became vacant, unsecured, and frequented by transients.  The result is predictable.  In May 1968, a fire was started.  Despite efforts by firefighters during which four of their number were injured, the building was destroyed. The Burlington folks were undismayed.  They had intended to raze the station anyway. What impact could the C B & Q have had on our downtown?  All we have to do is look at St. Louis Union Station, which was renovated in 1985 and has become a major commercial center and tourist attraction. Union Station is much larger than the Q’s was, but the combined square footage of our station with its 270-foot long freight house could have been adequate for adaptive reuse  in the heart of downtown.  Removal of the  unused surrounding tracks would have allowed necessary parking.

Union Station is Romanesque, just like ours was, and has a clock tower, just like ours.  Imagine the possibilities, if the “Q”  had only been secured and “mothballed” while we waited a few years. Nowadays, there’s only one part of that dream that has been achieved. The site is – yep, you guessed it – a parking lot.

This article by Diane Oestreich is slightly modified from the original, which appeared in the Rock Island Argus and Moline Dispatch on September 1, 2002.