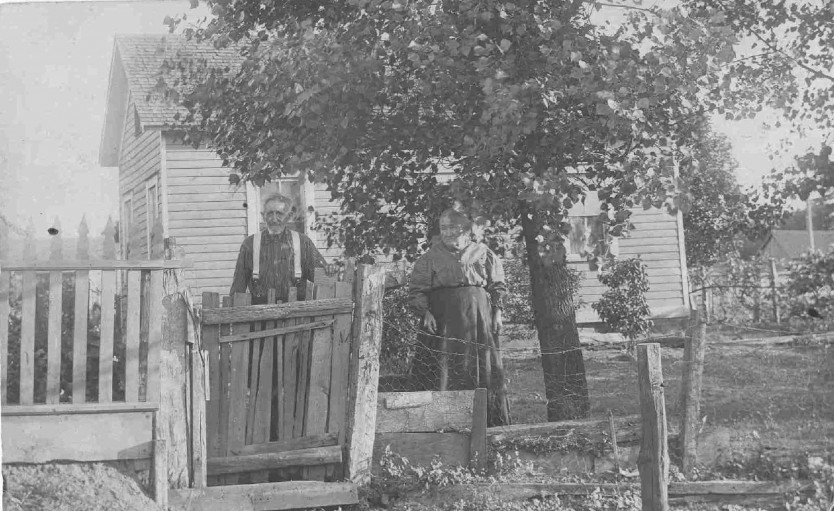 There is a surprising story behind this simple postcard.  An elderly couple is posed behind a fence, their small house in the background.  A gate, cobbled of scrap wood, separates neatly shaped pickets on one side from wire on the other.  Like other Real Photo postcards, it may be one-of-a-kind and it now belongs to Greg Binder who shared it with us.

Neither is smiling, but smiles were not the style of 1910, about the time this picture was taken. The old gentleman standing behind the gate has a neatly trimmed short beard and wears a striped shirt with wide suspenders.  The lady is nearby under a small cottonwood tree (the characteristic leaves are apparent under magnification).  Her gray hair is caught in a high bun and she wears a long-sleeved blouse with a dark skirt.  She bears a strong resemblance to her well-known half brother.

This would be an interesting but anonymous scene, were it not for the handwritten caption on the reverse side:  “Grandma and Grandpa Ferkel.  She is the daughter of Colonel Davenport.”

And here’s the rest of the story.  George Davenport was one of the first European settlers in this area, arriving in 1816, when he was 33 years old, to work as a trader and supplier at Fort Armstrong.  “Colonel” was an honorary title and Davenport wasn’t even his real surname, it was King.  He brought his wife, Margaret Bowling Lewis, a widow 14 years older than he, whom he had wed in 1805.  Margaret, who outlived George, also had a daughter, Susan Lewis, who lived with them.

And then Col. George Davenport, honored as the founder of Rock Island and the namesake of Davenport, proceeded to father two sons by his stepdaughter, Susan.  The older, George L. Davenport, was born in 1817 when Susan was just 16.  Bailey arrived in 1824.   Today, Col. Davenport would likely be imprisoned for his behavior with a family member.  But in those days of frontier isolation, there just wasn’t anyone to come to the defense of a young girl.

This wasn’t Davenport’s only extramarital activity.   He is reported to have fathered several children – “catch colts” they were called — from relationships with many women of both European and Indian descent.  One of these children was Elizabeth Davenport, born in 1835 when Col. Davenport was 52 years old.  Elizabeth’s mother, Catherine Pouitt, was a laundress at Fort Armstrong on Rock Island.

To his credit, Davenport acknowledged most of his children and provided modestly for some of them while he was alive.   But there was inequity.  His sons from stepdaughter Susan lived with him, were well educated and ultimately were the major beneficiaries of his estate after his death in 1845.   Elizabeth, in contrast, was left only $1000, to be managed by her half-brother, George L. and given to her when she was of age.  Elizabeth did not receive the education of his two sons, either.  In later years she signed legal documents with an “X”.

Elizabeth, “Lizzie,” spent her childhood and youth between Rock Island and St. Louis, where she and her mother often accompanied Susan Lewis.    In 1952, she wed Niclos Ferkel, who had come from Germany as a boy, in Waterloo, Illinois, near St. Louis.  The Ferkels returned permanently to Rock Island in 1871.

Although Bailey Davenport, whom she resembled, is said to have helped his half sister, the Ferkels did not share in the Davenport riches.    Nonetheless, Niclos and Elizabeth managed and ultimately had fourteen children.  Niclos died at age 85 in January, 1913.  Only six months later, Elizabeth succumbed after her clothing caught fire in a kitchen mishap at home.

Their home at 518 Lowell Avenue is shown in this postcard.  It still stands today, with a new address, 518 23rd Avenue.  Over the years it has been enlarged and modified, but its simple shape and high foundation reveal the historic roots.  In that era, several of the Ferkel children lived near their parents on Lowell Avenue and also on Hinrichs Street, now known as 22nd Avenue.

Although of limited means, Elizabeth Davenport Ferkel had other riches .  There are no recognized Davenports that still bear her philandering father’s name.  But at the time of their death, Elizabeth and Niclos were survived by seven children, seventeen grandchildren, and five great-grandchildren, assuring their honorable name would be carried well into the future.

This article, by Diane Oestreich, is slightly modified from the original, which appeared in the Rock Island Argus and Moline Dispatch on June 19, 2005.

NOTE:  After this article appeared in the Argus & Dispatch, a Ferkel descendant contacted the postcard’s owner, Greg Binder.  Mr. Binder graciously gave him the card, a piece of his family history.