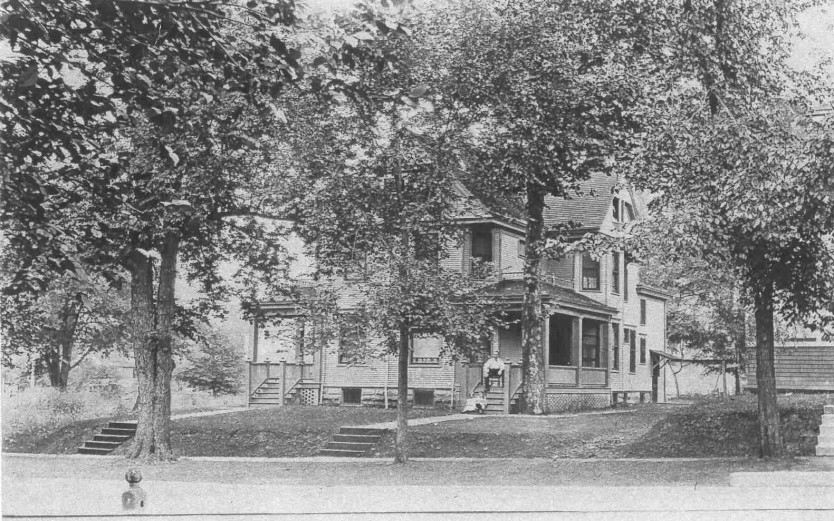 There’s a wealth of local history in Augustana College Library’s Special Collections.  That’s where we found this rare “real photo” postcard, dating from about 1910.  It shows a double house, a side-by-side duplex, located at 1019-1021 21st Street in Rock Island.   The double house style is surprisingly common in Rock Island, even though it can be rare in other communities.  The Broadway Historic District alone has about thirty double homes and there may be as many as a hundred within the entire city.

Most of our double houses were built between 1900 and 1910. This one, dating from around 1905, has had many residents over the years.  The earliest was Modern Woodmen of America bookkeeper Millard T. Stevens and wife Louise. Architect Cyrus D. McLane and wife Blanche lived here a few years later.  Another resident we noted was John B. Cox, an engineer for Velie motors.  None of the occupants remained here very long, which may indicate that neither side of the house was regularly occupied by the owner.

Our double houses share many similarities in style.  Most have Colonial Revival style porches and a simple Queen Anne (sometimes called “Princess Anne”) body.  Among the typical Queen Anne elements are massive and complex rooflines, decorative shingles, bay windows, and stained, beveled or cut glass in windows or doors.

Often the double house is perfectly symmetrical, both inside and out, but in a few cases one side may be more elaborate, either in size or interior finish.  Presumably this side was the owner’s residence.  Frequently, too, we find that relatives shared these homes, usually siblings or parents.   The floor plan commonly consists of a hall, living room, parlor, dining room, kitchen and pantry downstairs, with three bedrooms and a bathroom upstairs. There is usually a large walk-in attic, divided right down the middle, as well.

A few double houses have been converted to three- or four-plexes over the years.  In such cases, renters on each side may share a common entryway.   The kitchen pantries in these houses (and many other old homes as well), provided a convenient spot to convert to a first floor bathroom.

Porches on the double houses vary a great deal in location, size, and structure.  Some have separate porches arranged such that the adjacent porch can’t even be seen; others have a larger shared porch.  We like to think that these shared porches are an indication of relatives sharing the home, while private porches mean the house was built as rental property.

As noted above, there’s a great deal of similarity among all of Rock Island’s double houses.  But the one on this postcard is unique – different enough that it’s worth taking a closer look.  The south side of the house – right hand on our photo – shows a tall gable in the attic, above bay windows on lower stories.  However the north side of the house has a tower in place of the gable, with the angle of the bays going right up above the roofline and topped by a pointed octagonal roof, with fancy shingles underneath.

The siding on the postcard house is unique as well.  While at first glance, it looks like the ordinary narrow clapboard so popular early in the century, closer inspection reveals that each clapboard has a fancy “ogee” or s-shaped lower edge.  The porch columns, too, are different from those on most double houses.  They are very large and square, with fluting on all four sides.

The house today looks very much like it did 90 years ago, except that the little “balcony” railing atop each porch roof has been removed.  Although we don’t know the identity of the gentleman and two children on the porch steps, we do know that the current owner, a descendant of the family who has owned the house since the early 1950s, has been restoring it, both inside and out, in recent years.  He has removed newer hard shingle siding and is replacing damaged clapboards and trim.

So take a second look at this double house, then see how many other double houses you can find in Rock Island.  We’ll wager you can’t find two that are totally identical.  If we are wrong, please let us know.

This article, by Nancy Hanna and Diane Oestreich, is slightly modified from the original which appeared in the Rock Island Argus and Moline Dispatch on December 9, 2001.