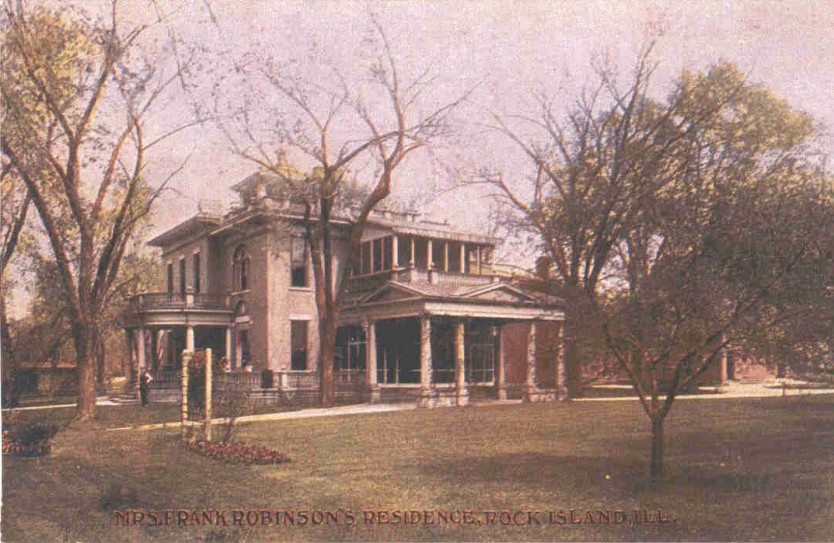 Although the postcard identifies this house as belonging to Mrs. Frank Robinson, it began its life as the home of her in-laws, Mr. and Mrs. Thomas J. Robinson.  Thomas J. Robinson was the subject of another postcard story about his namesake ferryboat.  We noted that stories about Mr. Robinson were not always consistent – and we repeated one of those inconsistencies by stating that he was married to the daughter of pioneer settler John Spencer.

That was incorrect.  Thomas J. Robinson, who had come to Rock Island as a young man, was wed to Miss Amy Henderson in 1846.  In the early 1860s they built this home at 613 20th Street, then known as Madison Street. It faced 20th Street and occupied the entire block between 6th and 7th Avenues all the way to 21st Street.  According to Sanborn Fire Insurance maps, it was brick, although that is not apparent from our picture.

In 1852, the Robinson’s only child, James F. was born.  Amy died in 1895 and Thomas died in 1899.   Although the Robinsons were active in the Methodist church, both funeral services were held in their home rather than the church.  At his funeral, the Argus noted that the lower rooms and halls of the “palatial home” were filled with well-wishers.  The house even had a pipe organ, which was used for the funeral music.

As their son James F. matured and began to take a prominent role in his father’s businesses as well as in new ones, he began using his middle name, Frank. In 1899, J. Frank married the former Miss Mary E. Rhoads of Pekin and they moved into the family home.   After only a few years of marriage, Frank died of heart disease in 1902.  Like his parents, his funeral took place in the home.

Frank and Mary had no surviving children, their two daughters having died in infancy.   Mary took over as president of several family businesses and stayed on alone in the palatial Robinson house.  This postcard view shows the home in the early 1900s, as seen looking northeast from near the corner of 20th Street and 7th Avenue.

At first glance, this home looks too “modern” – perhaps it is a replacement for the original Robinson house.  But a closer look shows that beneath all the porches and the porte cochere that allows carriages to drive right up to the house, lies a rectangular Italianate home, complete with a belvedere atop its hipped roof.  (There is only one belvedere remaining today in Rock Island, just up the street at 820 20th Street.)   This elaborate version of the Italianate style would be very characteristic of the 1860s, especially for a prominent family.

The curving front porch, the second story sleeping porch and the porte cochere with its Grecian looking peaked gables are almost certainly later additions. It’s likely that the large wing in the foreground, with its slightly lower eave line surmounted by a railing at the roof edge, is also an addition to the original house.

Voila!  The original Italianate house was neatly transformed into a Classical Revival building.  Architect George Stauduhar’s archives at the University of Illinois list 1897 drawings for a Robinson Residence. It’s quite possible that those drawings are for this remodeling.

The postcard also shows a building to the right, behind the house.  This was a two-story barn.  It’s reported that Mrs. Robinson used the eastern portion of the block as a pasture for her cow.  When Mary Robinson died in 1927 at the age of 77, her obituary noted her as a “musician of unusual talent.”  At her funeral, held in the home, there was no sermon at her request.  But there was organ music in its stead.

According to obituary stories, the childless couple had decided before Frank’s death to leave their home to the Methodist Church, to be used as a home for “deaconesses and orphans.” Despite that greatly generous act,

the mansion may not have been readily adaptable to such use, as City Directories simply list it as “vacant” for several years.

In 1934, the Argus reported that a Rock Island Chancery Court said that the Methodist church could be permitted to dispose of Robinson house, despite the terms of the will.  The reason was based on “changed conditions in the church” which made the proscribed use as a home impractical.  The proceeds from the sale of the property were to be used for deaconess and orphanage work in the city.

Today, there’s absolutely no remnant of what was surely one of Rock Island’s finest homes. Twenty-first Street has been closed and the Robinson land, now surrounded by a chain link fence, has become the athletic field for the school, formerly Central Junior High, later new Lincoln School, and now vacant.

Some peaceful day, stand near the center of that field and listen for strains of a pipe organ played by a talented musician. Mary Robinson may oblige, at least in your mind’s ear.

This article, by Diane Oestreich, is slightly modified from the original, which appeared in the Rock Island Argus and Moline Dispatch on December 15, 2002.