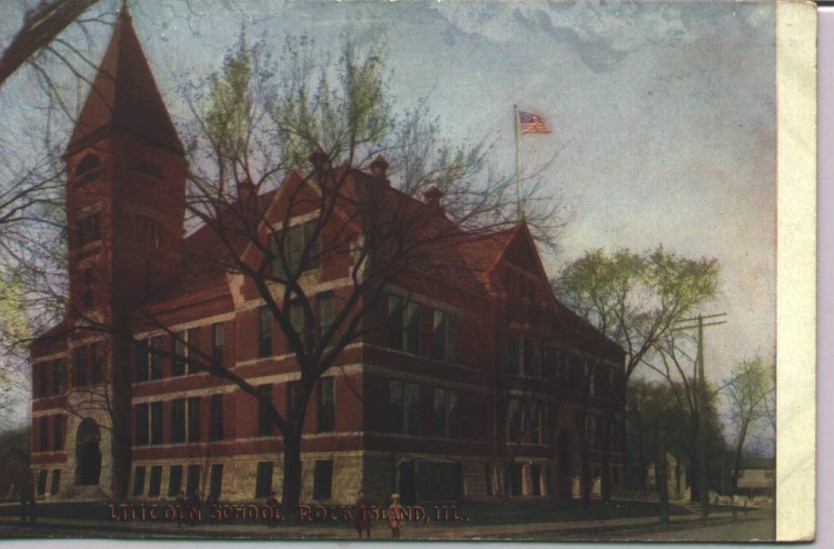 Looking much as it did when constructed in 1894, “Old” Lincoln School stood at the corner of 7th Avenue and 22nd Street until 2012.  It that era, each Rock Island ward had its own grammar school.  Ward 4 was served by P.S. No. 4, as Lincoln was called originally, although it’s only coincidence that the ward and the school number were the same.   A few years later, in 1897, the school board decided to discontinue the numbering of schools and rather name them for “deceased men of letters.”  Lincoln School was chosen as the new name for P.S. No. 4.   Until its closing in 1980, this building was the neighborhood school for much of what is now known as the Broadway Historic District.

The square block between 21st and 22nd Streets and 6th and 7th Avenues was the educational center of Rock Island ever since the Rock Island School District was organized in 1857. Lincoln was built on the site of an early high school building.  A “new” high school had recently been built on the part of the block diagonally opposite at 21st Street and 6th Avenue (21st Street was still a through street.)   Lincoln had a great resemblance to that high school and was likely designed by the same architect, Edward S. Hammatt.  Both buildings had similar arched entryways, horizontal stone banding and steep gables.

This circa 1905 postcard, which appears to have been created from a photo used in “Picturesque Tri-Cities” (1902-04), was published by the Rock Island Postcard Co.  Comparison to the original photo shows that the flag was a painted-on enhancement as was the coloring of the postcard. The only significant change over the years was the loss of the top story of the bell tower, which was removed in the 1940s.  Unfortunately, the bell disappeared at that time as well.

Early in the 20th century, Lincoln averaged an attendance of about 600, including a “school for the deaf” in the lower level.  At its closing in 1980, the function and name of Lincoln was transferred to the former Central Junior High building to the west.  Old Lincoln, P.S. No. 4, was sold and by 1984, it was scheduled for demolition.  A stay of execution was granted when it was designated a Landmark structure by the Rock Island Preservation Commission.  It was later purchased by private owners who achieved its listing on the National Register of Historic Places.  They hoped to restore and adapt the building for a new use.  Alas, decades of neglect and deterioration due to a long-leaking roof led to the decision by the city, who had owned the school since 2007, to demolish it.

P. S. No. 4 was an architectural masterpiece in the Richardsonian Romanesque style and was designed by architect Edward S. Hammatt.  Born in Geneseo New York, Hammatt was educated at MIT and later worked for the nationally known architectural firms of Ware & Van Brunt in Boston and Hardenbergh & Le Brun in New York.  He came to the Quad Cities in 1883 and maintained offices in both Rock Island and Davenport.

Lincoln School provided Hammatt a marvelous palette for his talent.  Costing $46,900, construction was done by John Volk & Co.  The foundation of the brick building was made of Anamosa limestone with Bedford (Indiana) limestone used for trimming.  Bedford is a hard and smooth-grained stone, which is ideally suited for carving – notice the beautiful carving of the entrance arches.  Those arches over the two recessed entrances are characteristic of the Richardsonian Romanesque style. As well as being beautiful, Lincoln was noted for its unusual open floor plan.  Classrooms line the exterior walls of the building with a massive “split” staircase in the northwest corner surrounded by huge open hallways.  According to a 1905 Argus article, “The great center halls of the building have proved to be one of the most satisfactory arrangements in the schools of the city.  The (school) buildings erected later than 1892 have halls patterned largely after the plan of the Lincoln building.”

In addition to several downtown buildings, an early Inn at Black Hawk Park, and buildings for Augustana College, Hammatt also designed three other schools in Rock Island, as well as the remodeling of the Weyerhaeuser dining room (now Augustana’s House on the Hill.).   Until its 2012 demolition, Lincoln School was the only remaining Hammatt building in Rock Island—and the oldest surviving public school building as well.  Hammatt was only 50 when he died in 1907, and much of his work has now disappeared as well.   Watch a video of the destruction of the iconic arch, the last piece of Lincoln to fall.

This article by Diane Oestreich is slightly modified from the original, which appeared in the Rock Island Argus and Moline Dispatch on May 13, 2001.