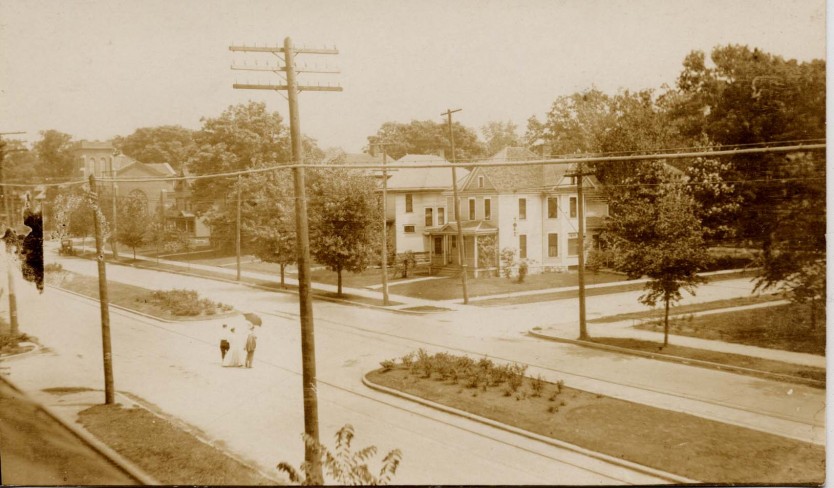 There was no caption on this Real Photo postcard found in the Augustana College Library Special Collections, but someone had handwritten a notation: “44th Street and 7th Avenue.”  Further investigation found the postcard scene was actually showing the southeast corner of 42nd Street and 7th Avenue, right across from today’s Longfellow School.  The school property is the grassy area to the right of the postcard.

This image captures the appearance of 7th Avenue shortly after 1910, when ladies still wore long dresses and gentlemen carried their parasols (or more masculine umbrellas) to shield them from the sun. (A few shadows are visible, so we know the sun is shining.)  Spencer Memorial Methodist Church, which was completed in 1903 and dedicated in 1907, appears at the far left, and there are five houses lining the south side of this block between 42nd and 43rd Streets.  The oldest of these is the house across from the church, built around 1892.  The prominent corner house at 4202 7th Avenue was built about 1900, while two homes just to the left of it were the last on the block, built about 1910.

All of these houses have seen changes over the years, most commonly by the addition of different siding.  Yet their overall forms are unchanged, and today the block still evokes that day 90 years ago when the photographer’s shutter froze the moment.   What has changed a great deal over the years is 7th Avenue, which was not even paved when most of these homes were built.

Surprisingly, the street width nearly a hundred years ago is the same as it is today.  From 35th Street east, the right-of-way of 7th Avenue is a full 100 feet, rather than the 80-foot width to the west.  But there are two notable differences from now.  The first is that not a single vehicle is in sight.  No autos, no horse-drawn carriages, not even a streetcar, though this was on the route, not even a bicycle.   The second eye-catcher — a wide landscaped swath runs right down the center of the avenue.

How did this beautiful boulevard come to be?  It was a result of the nationwide “City Beautiful” movement of the 1890s and 1900s.  In the latter half of the 1800s, the nation’s population had increased dramatically with many more Americans living in cities.   Cities became centers of poverty with poor sanitation, squalor, and crime.  Some reformers – including Rock Island’s Susanne Denkmann — opened settlement houses or concentrated on improving sanitary conditions.

Other reformers promoted the City Beautiful.  They were certain that a beautiful city would inspire its impoverished inhabitants to “moral and civic virtue.”  Beauty would be an effective social control device; it would shape human thought and behavior.  City Beautiful was an environmental, cultural, and aesthetic movement.  At its best, successful implementation of City Beautiful concepts would result in the sweeping away of social ills, our cities would be brought up to the standards of the great European centers, and the newly inviting city center would bring upper classes back to the city, if not to live, at least to work and spend money. (Isn’t this same philosophy espoused today by many of our city leaders?)

What did this mean for Rock Island?   A November, 1912, Argus feature on Rock Island parks was headlined “Movement for City Beautiful shows Marked Results.”  The article described the development and expansion of our parks in the previous decade.   And singled out for special praise was 7th Avenue.  The project authorized by the City Council in 1909 was described — “The avenue, under the care of the park superintendent, has been boulevarded and laid out in pretty grass plots with flowering shrubbery and flower beds of various varieties.  Looking along the avenue from west to east or vice versa, passing Augustana College and Denkmann memorial Library, the avenue is a place of great beauty.”

An earlier Argus story in 1907 noted that 7th Avenue will be “the first in Rock Island to be made a boulevard and the result is being watched with interest.”   Perhaps the  then new boulevard near Augustana College inspired the 1910 request —  rejected by the City Council — to rename 7th Avenue as “College Avenue.”

However boulevards were  popular for some years.  The December 31, 1925, Argus said “The 6th, 7th, and 18th Avenue boulevards in the east district of Rock Island are under the care of the Park Board, whose aim is to make the eastern gateway to the city as attractive as possible.”

In 1956, one-way streets were introduced in the downtown area.  Several years later, the one-way system was extended all the way to the Moline border and beyond in order to accommodate the burgeoning farm implement factories and their auto-driving employees.   In the process, 7th Avenue became a multi-lane one-way and the beautiful boulevards were eliminated.

Today, the factories are closed and 7th Avenue is much quieter.  So quiet, that the residents of the surrounding Keystone area believe it is time to return to the neighborhood-friendly two-way street with its center boulevard.  Several years ago, the boulevard through the Augustana College campus was reinstated.  Will Keystone be far behind?

This article by Diane Oestreich is slightly modified from the original, which appeared in the Rock Island Argus and Moline Dispatch on February 15, 2004.