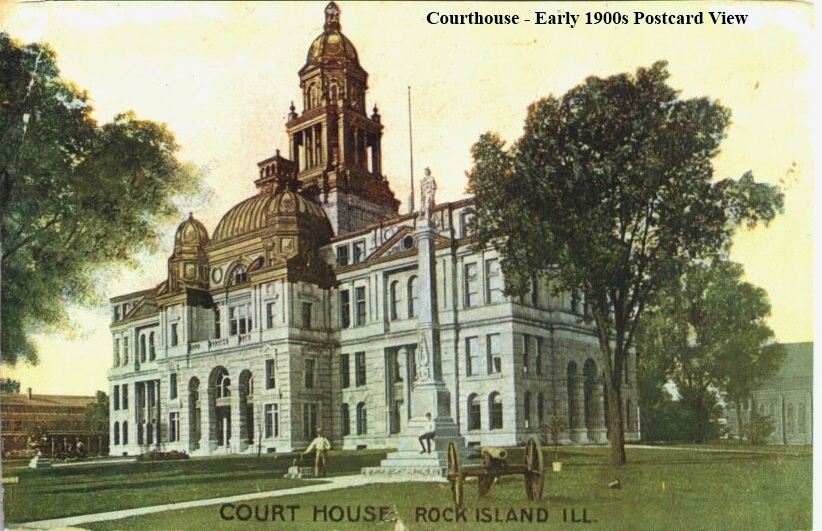 What a beautiful courthouse!  This postcard, from Dr. Mark Buckrop, never fails to elicit oohs and ahhs when people see it for the first time.   Then the question is, “But what happened to it?”  Rock Island County was officially established in 1833 and Stephenson, as the city of Rock Island was known then, was the county seat.  Stephenson Square, the block between what is now Second and Third Avenues and 14th and 15th Streets, was selected as the site of what would be known as Courthouse Square.  In 1836, a fine brick courthouse, 50 feet square, was erected on the south or Third Avenue side of the square.   Old photos show it had round-topped windows, a hipped roof, a tall central cupola and a wide one-story front porch facing north onto the square.

Some years later, that early courthouse was extensively remodeled to become much more imposing – more governmental looking — with the addition of four massive two-story columns supporting a triangular pediment on the front (north side).  The remodeled building looked a great deal like the Buford House (now Word of Life Church) on 7th Avenue at 18th Street that was the subject of another postcard article.  A winding exterior staircase extended from either side of the front porch directly to the second story.

As the population of the county increased, an even bigger courthouse was needed to replace the old one, which was by then called “Rock Island County’s disgrace.”  In 1895, the county’s building committee voted to accept a design submitted by the Kansas City architectural firm of Gunn & Curtis for a new four-story building that was called, on different occasions, Spanish Renaissance or Roman in style.

The 60-room courthouse was the work of Rock Island contractor and stonecutter Charles J. Larkin and was completed in time to be dedicated on March 13, 1897.   It cost $112,201, not including the heating system.  After the new courthouse was occupied, the old one on Third Avenue was demolished.   The postcard courthouse was 170 foot long with an exterior made of Bedford limestone — a hard, fine-grained stone—which was selected to be blue in tint at the foundation level and buff above that. The marvelous interior was every bit as beautiful as the exterior.  The lower two stories have deeply recessed joints between the stones, while the upper floors are smooth.  Notice the variety of forms and functions on the exterior – round topped entrances and windows, circular windows in the triangular pediments, balconies, and bulbous standing-seam metal roofs and, above it all, domes –at  least six of them, large and small.   It’s not surprising that from the earliest drawings for this courthouse, it was nicknamed “The Dome.”  That name, of course, referred to its prominent main dome that ultimately extended 154 feet above the street.

This postcard, published around 1910, shows the courthouse as it appeared when it was built.  But when we fast-forward fifty years to 1958 there’s a front-page picture in the Argus showing the domes being removed.  Only sixty years after being built, the copper roofing on the domes had “worn out”.  Rather than repairing or replacing the roofing, a decision was made to remove all of the domes, leaving a truncated version of this originally spectacular building.  Preservationists hope this wouldn’t happen today – and would like to envision a day when the domes are restored. 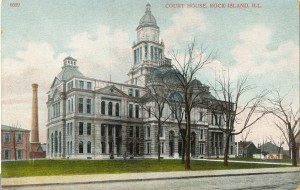 Today, the courthouse still has its beautiful exterior masonry and the interior has kept most of its original fine materials – even some original furnishings.  Floors in the central rotunda area and the corridors were of marble or tile and other floors were of durable and beautiful hard maple.  The rotunda and corridors had pink Tennessee marble wainscoting.  Other interior walls were paneled in quartersawn oak or were frescoed.

Notice that this postcard also depicts the Civil War soldiers monument.  Over 30,000 people gathered to mark its unveiling in 1869.  It was created by Rock Islander sculptor Leonard Wells Volk, who maintained his shop at 2nd Avenue and 16th Street.   Volk, who had come to Rock Island in 1853, later founded the Chicago Academy of Design.  He is also reported to be the only sculptor to model Abraham Lincoln from life and he was able to make life-masks as well as casts of Lincoln’s hands.  He created several statues and busts of both Lincoln and his rival Steven A. Douglas, which were are in Springfield and Chicago.  Although Rock Island’s Civil War monument is still beautiful from a distance, a closer look shows that it is weathered and worn, many of its names unreadable, and the originally sharp edges soft and rounded.  Wouldn’t it be nice to see this fine work restored and preserved for future generations?

This article by Diane Oestreich is slightly modified from the original, which appeared in the Rock Island Argus and Moline Dispatch on February 10, 2002.

NOTE:  As this article is being republished, the future of the historic Rock Island Courthouse building is in jeopardy.